Periodically, I like to take a look at new figures that are available for pre-order. This isn’t intended to be an exhaustive list, but rather a selection of new releases that I personally find interesting or notable.

After my previous preorder post, I decided a more frequent cadence might be beneficial to keep these posts from growing so monolithic in nature. This is the first of what will hopefully become a mid-quarter format. I still managed to find fourteen figures to talk about since August, which was a bit of a surprise as well as a strain on the budget given that some manufacturers, notably Alter, seem to have dramatically shortened their preorder windows here recently. 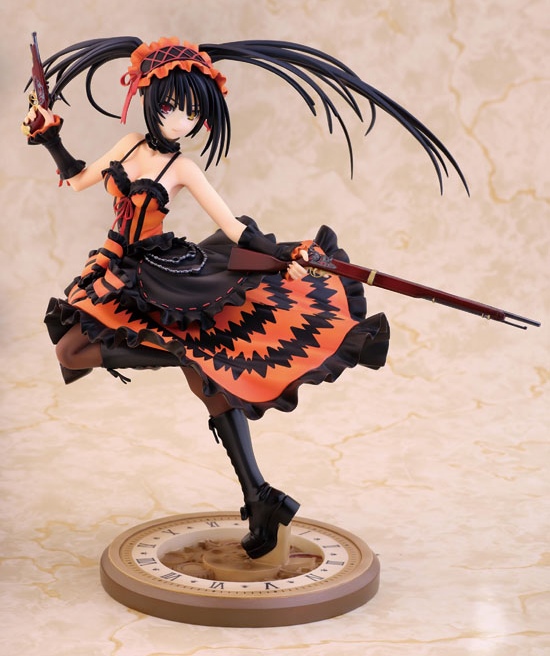 Kurumi is one of the more appealing girls in Date a Live, both aesthetically with her colorful goth-loli attire and the fact that she’s a complicated character who doesn’t easily fall into the protagonist’s harem like most of the other girls. The Alphamax design features an attractive pose, lots of nice hair and outfit detailing, and Kurumi’s trademark sidearms. Alphamax has been very active these past couple years, but I have only sampled their work once with Velvet. Fortunately for them, Velvet is an excellent figure which gives me confidence when considering Kurumi here. 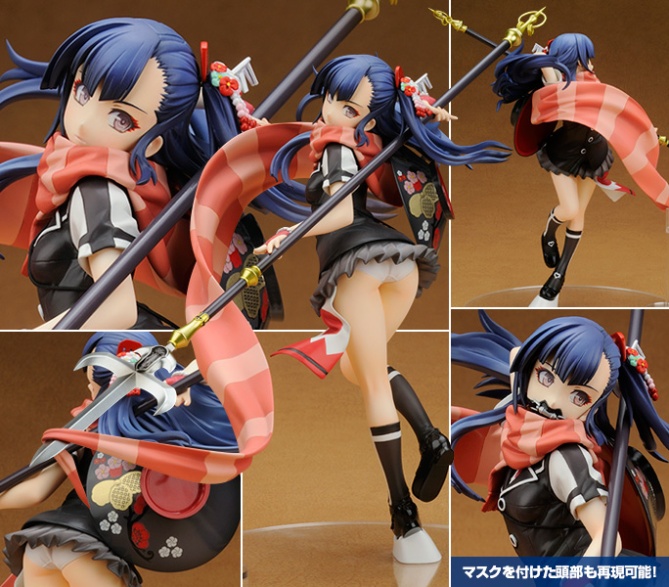 Alter’s Hyakka Ryouran lineup has been amazingly productive. I can’t think of any other series/manufacturer combo that has been nearly so good at relieving me of my money. I already have seven figures from the series and odds are good that Inshun here will joins their ranks as the eighth. As usual, Niθ’s skillful mashup of modern and feudal Japanese design elements is highly attractive and Alter has mated it with an equally fetching sculpt. Thankfully, Inshun is a standard release rather than a Hobby Japan exclusive, unlike many of the series entries to date. 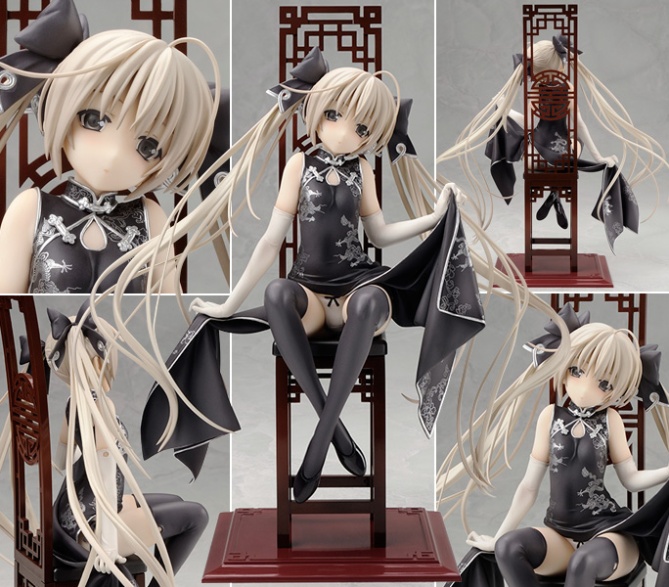 Alter just released the white variant of this figure, which I didn’t find particularly appealing, but I am rather liking the black trappings on Sora. Hobby Search has this figure marked as limited, and, alarmingly, they have already closed orders after less than one day. She’s still available at other shops, but if HS is any indication that won’t be the case for long. Given the potentially limited availability and the fact that Sora ranks below a number of other figures on this list by priority, it seems unlikely I’ll be able to find space in my budget while she’s still available. 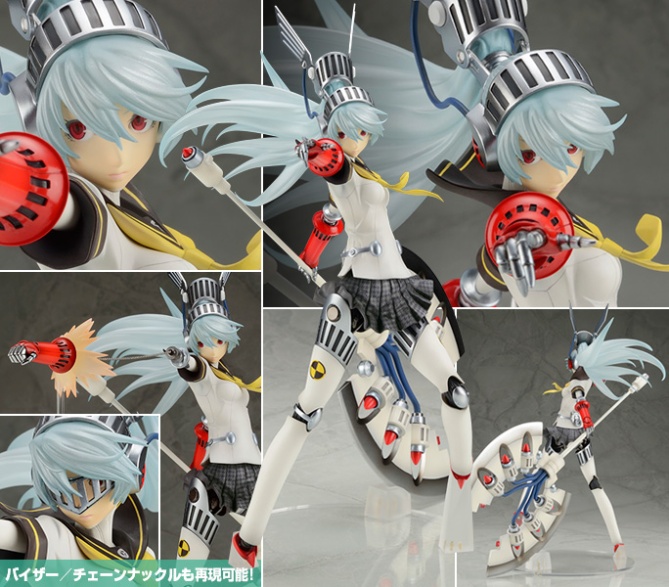 Alter’s Aegis is one of my favorite figures in my collection and one of the best Alter has ever produced. Labrys basically succeeded Aegis as the resident robo-girl for Persona 4, so it seems fitting that Alter should also be responsible for her translation to PVC. Disappointingly, Alter choose to render Labrys at 1/8 scale rather than 1/6 like Aegis, but they are at least delivering a mean-looking sculpt where Labrys is practically calling the world out and a few gizmos like a rocket-punch hand to help drive the price up to FREEing 1/4 scale levels. The pose is pretty badass and I do enjoy Shigenori Soejima’s robo-girl designs, but ¥16,800 plus likely EMS fees is a hard pill to swallow for a figure I’m not sure I love. 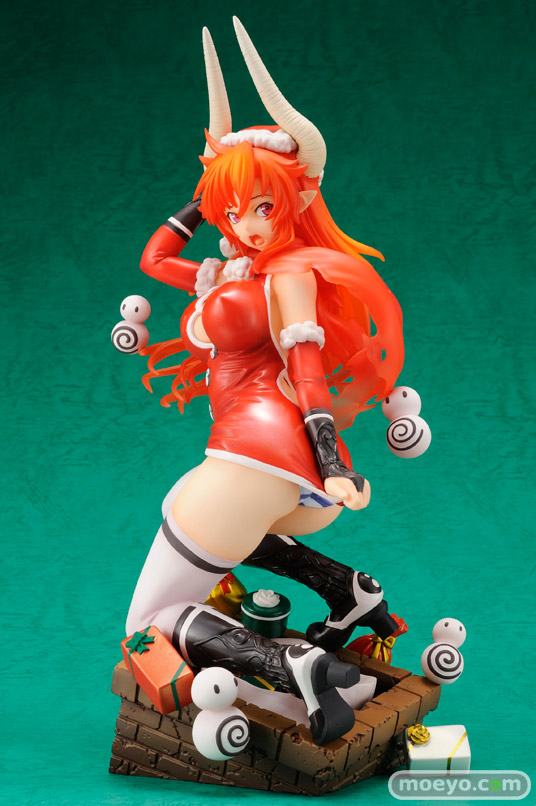 The Seven Deadly Sins series seems to have run its course in terms of covering all the principal characters in their standard outfits, which, of course, means it’s time to switch to fetish outfits. Amakuni has already unveiled a bunny outfit for Asmodeus, which didn’t particularly appeal to me, but this Santa-suited Satan pushes all the right buttons. Satan’s expression of comic distress at the brevity of her skirt is simultaneously cute and sexy. One could rightly point out that such effervescent behavior goes against everything that should be the aspect of Wrath, but one risks missing great figures when dwelling on such trivial details. Now, this figure does feature a cast-off, which is a bit of a concern after Amakuni’s handling of Leviathan, but I don’t intend to let it prevent me from getting Satan on order. 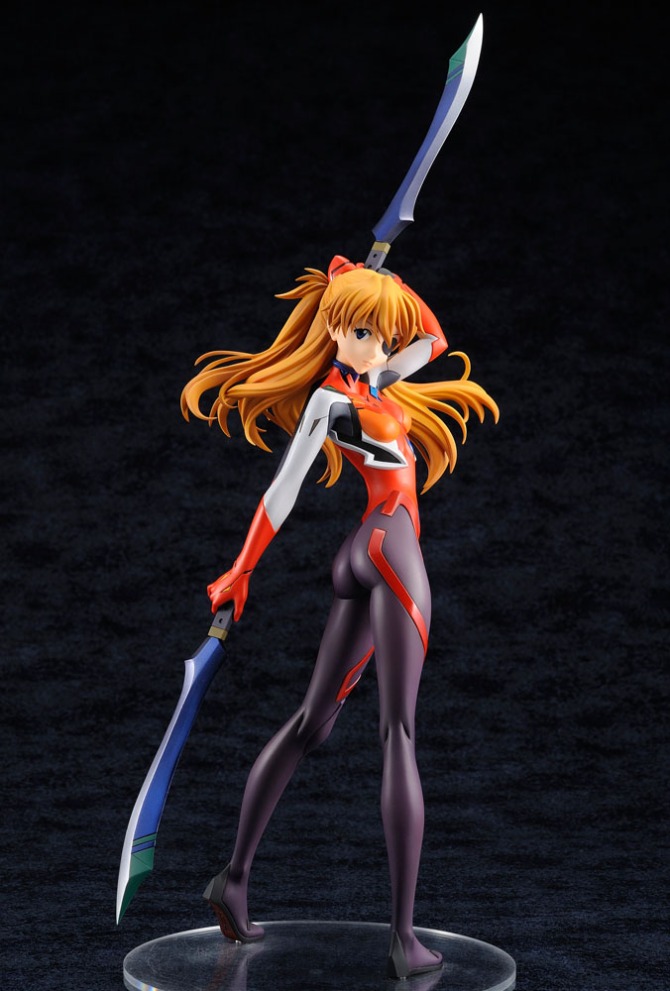 The Evangelion movie reboot has been a boon for Asuka lovers, as she has received a plethora of new figure designs; noticeably more so than her ever-popular castmate, Rei. I’m not familiar with this plug suit variant, which is neither Asuka’s classic plug suit nor the test suit variant introduced in the Eva movie reboot, or the double-bladed spear she’s wielding, so I’m going to assume that they appear somewhere later in the new movie series. This figure is quite large with Asuka standing 265 mm tall and the spear extending another 115 mm beyond that. Normally, I love large figures, but 380 mm is getting into impractically tall territory and I would need to make special arrangements to display this figure, which gives me pause on what would otherwise be an easy purchase decision. 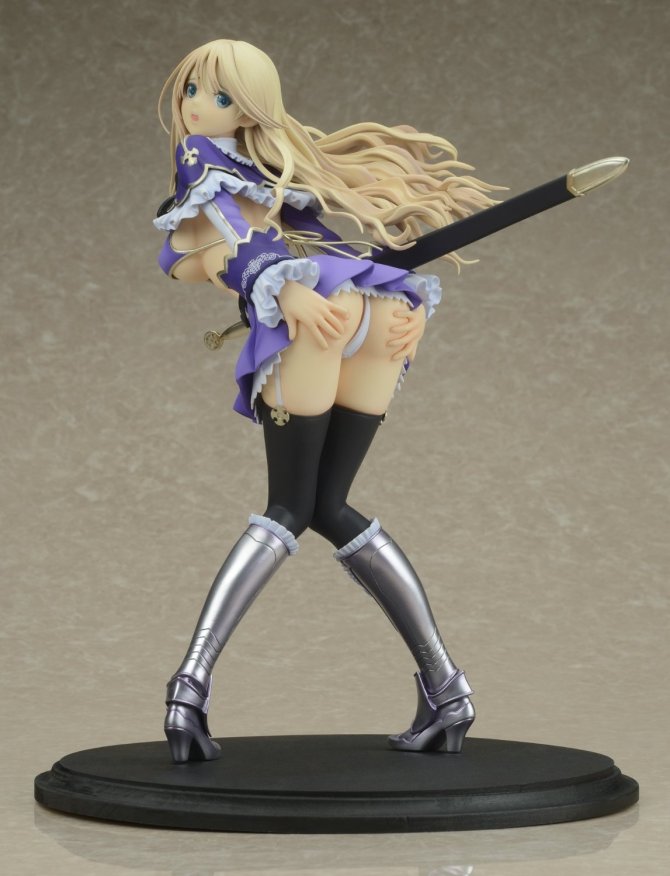 Dragon Toy’s adaptation of Tony Taka’s Collect 1 cover girl, apparently named Arianrhod, was easily my most anticipated unveil of the most recent WonFes event. The pose is majorly lewd, which is par for the course with Tony’s doujin work, but I love it and the fact that Dragon Toy wisely went large to bring out as much detail as possible. I’m already familiar with their good work through Hakufu, so I’m expecting good things from Arianrhod. 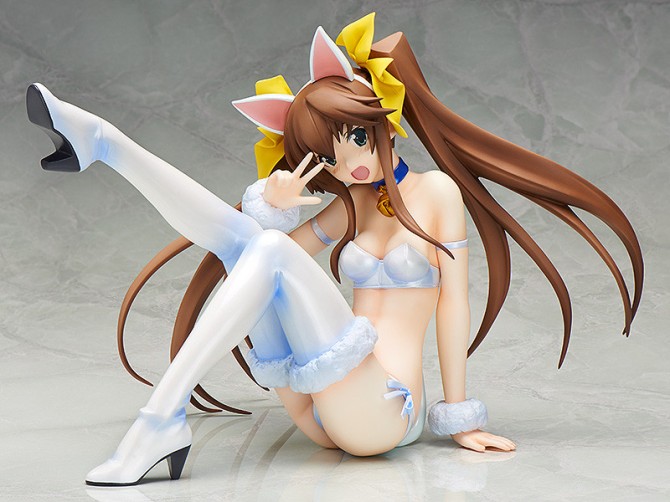 I get the impression that Ling is one of the least popular Infinite Stratos girls, which baffles me somewhat as I found her quite likable. Fortunately, popularity doesn’t seem to be a factor for FREEing to flesh out their 1/4 scale IS lineup and their take on Ling in quite nice, as she is seen sporting a playful pose and a skimpy cat-girl outfit. I’m not sure at this point if I prefer their Laura or Ling as a potential purchase. Either way, I’m still not too keen on the hefty price these large figures are commanding at preorder, so I’m hoping to see this figure hit the bargain bin before I will likely bite. 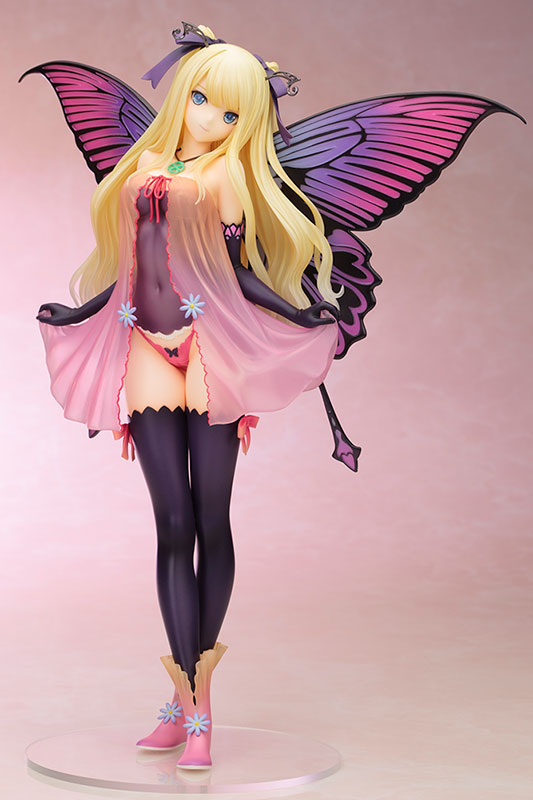 Kotobukiya already gave us a gorgeous slice of Tony Taka artwork-turned-PVC in Daisy and Annabel here is pretty much her sister figure, with the same scale, a similar outfit, and (in a sign of the times) higher pricing. I was apprehensive of Kotobukiya’s involvement with Daisy when she was first announced, but they really did a nice job on that figure and my only complaint is the glossy finish on her eyes. I think I actually like Annabel better than Daisy. Her pink and purple ensemble is quite cute and her slight curtsy is pleasantly inviting coming from a girl so minimally clothed. This is a pretty sure-fire pickup. It’s just a matter of when and where. 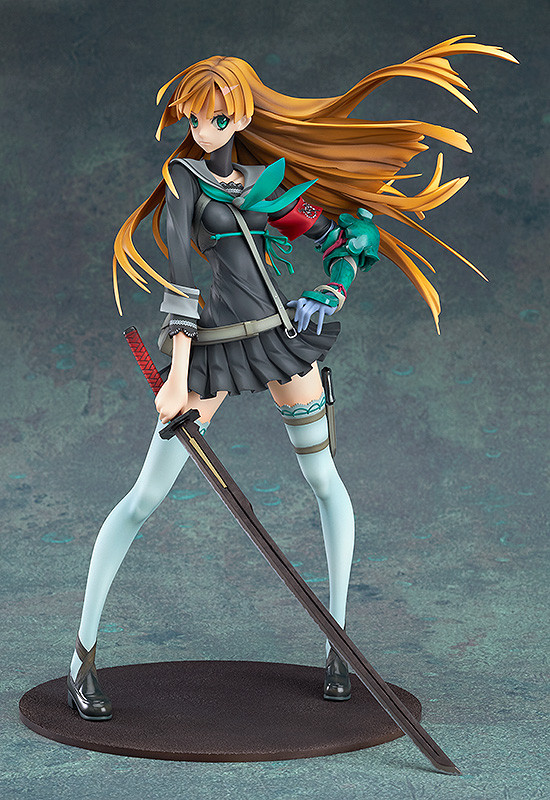 Max Factory’s 7th Dragon 2020 Samurai has proven to be extremely popular, as she now regularly trades north of ¥25,000 on sites like Mandarake, which is a level of post-release price inflation rarely seen on figures of such recent vintage. It follows that there’s a considerable demand to see that figure re-released, which Max Factory is not known for doing, so I suppose this repaint is there answer to sating the community’s desire for more Katanako. I already have the normal Katanako, so I really don’t need this figure, but the original is a personal favorite and I like the colors on this variant so much that I’m somewhat seriously considering picking this up. 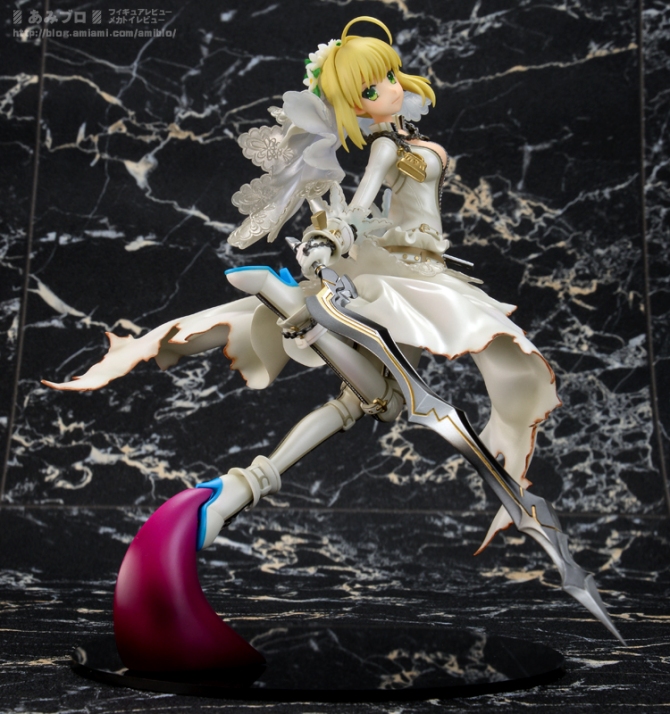 A new challenger appears! Medicom Toy emerges from the high-detail action figure niche to score a surprise Saber Bride scale figure. Even more surprising is how good this looks. I’ve been on the lookout for a good Saber Bride figure, as I quite like the outfit, but none of the offerings have quite done it for me. This is perhaps the most promising to date. The pose is very dynamic and eye-catching. The painted prototype certainly looks the part, but the fact that Medicom Toy doesn’t regularly do scale figures is a bit of a concern. In what has turned into an odd running gag, Saber once again forgets to zip up her shirt. 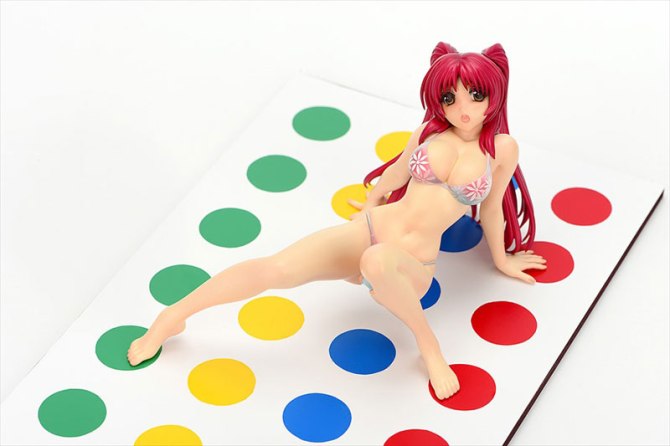 One might think it would be hard to bring something new in the seemingly never-ending world of Tamaki figures, but Orca Toys does an admirable job by injecting a Twister theme to what would otherwise be a very bland swimsuit figure and comes away with something interesting. It’s highly unlikely I’ll actually pick this up, but this did get my attention and a chuckle, so I think that’s enough to merit a mention. 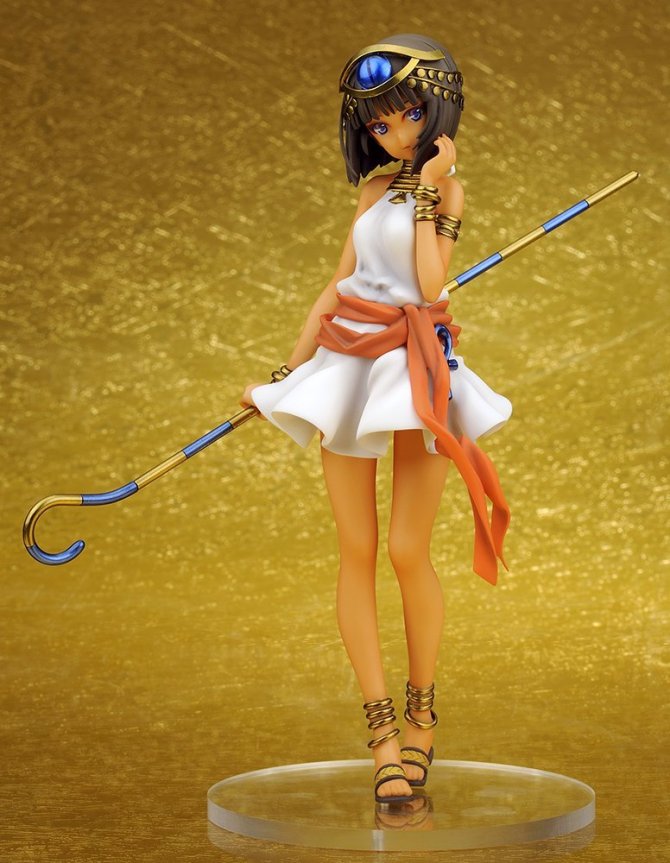 I had to do a bit of quick research to educate myself as to what Eiyuu*Senki GOLD is and why we have this moe-fied rendition of King Tut. I don’t have any particular appreciation for the game or the pose here, but I do appreciate the ancient Egyptian motif and Tut reminds me of the heroine from a certain Takatsu ero-manga that I quite enjoyed. Quest Q’s prototypes usually look good, this one included, but I’ve noticed that their figures seem to garner only middling user ratings on MFC, which is a bit of a concern when considering Tut, especially given that this figure isn’t particularly cheap (¥9,800) despite the simple pose and only 1/8 scale. 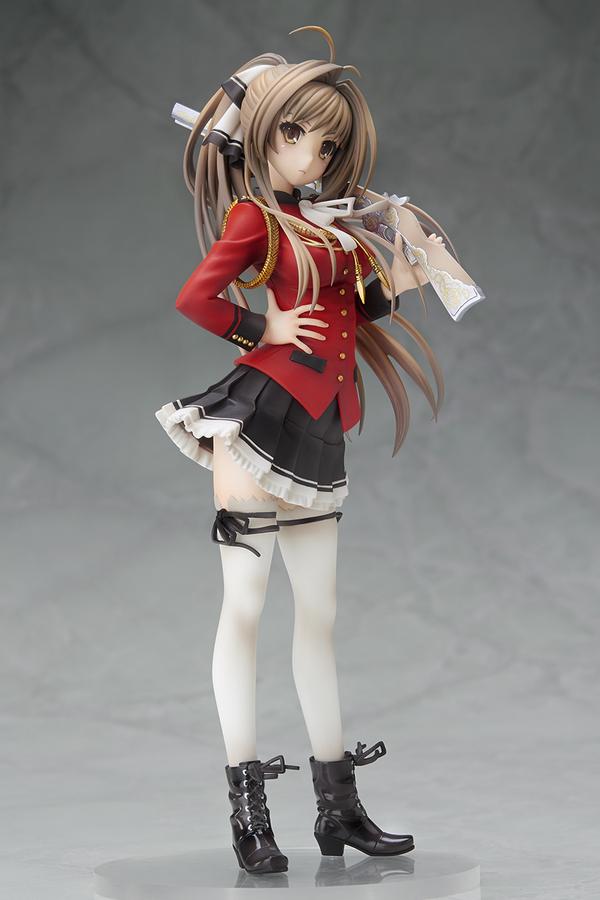 I tend to order so many Hobby Japan exclusives and so few from other Japan-only shops that it can be easy to forget that they exist, but this figure featuring Isuzu from Amagi Brilliant Park is a Kyoto Animation exclusive that happened to catch my eye. I know nothing of the character or the series, but there’s something about the uniform design, particularly the bold red color, that draws the eyes and more subtle details like zettai ryouki, gorgeous hair, and Isuzu’s authoritative expression that keep them there. This figure is credited to a company named Stronger, which is a new one on me, but MFC informs me that most of their past work is in Aniplex exclusives. Several prominent US shops are offering Isuzu at quite reasonable prices, which helps make the case for giving them a shot with this figure.