We’re at the mid-point of the year, which means it’s time to give an update on where I stand with the budget. The format will mostly follow that of the year-end reports with fewer graphs because analyzing only six months’ worth of data isn’t as interesting for certain categories.

First off, let’s see how the US dollar has fared against the Japanese yen in the first half of the year.

While the year so far has been marked by volatility, the overall trend has significantly favored the dollar, which is currently up 14% against the yen compared to the beginning of the year and 24% compared to this same time last year. This is good news for collectors in the US as a stronger dollar directly translates into lower costs regardless of whether you buy from foreign or domestic shops.

Looking forward to the second half, I expect further strengthening of the dollar, but at a slower pace than the first half. I’m no forex analyst, but I’m thinking that the USD/JPY index will end the year somewhere in the 100-110 ¥/$ range.

By this time last year, all of my prior year orders had come in and I was able to give an update with the final costs of all the previously open preorders. This year has played out a bit differently as I still have three open preorders from 2012 at the halfway mark.

Leviathan came in over estimate due to an unexpected bump from SAL to EMS shipping. Given that I feel Levi’s EMS requirement was entirely due to her very large and heavy display base, I won’t be surprised if Lucifer carries a similar requirement come release. Otherwise, I would expect that Suzuha and Lucifer will come in below estimate due to improvements in the exchange rate (see previous section) since their order dates.

Hanna-Justina, on the other hand, was paid in advance, as is often the custom with exclusives. She serves as a painful reminder of how a deposit on a preorder paid in JPY can bite you later if exchange rates improve before the order is filled. I figure I could save roughly 25% if I could pay for Hanna-Justina today versus last year due to differences in the exchange rate between then and now, but I can’t realize those savings because I’m locked in to the old exchange rate by the deposit. This is the reason why I specifically looked for a shop that would accept orders on exclusives without a required deposit (see my Keiji order with Nippon-Yasan below).

Here’s the transaction log for the preorder portion of the budget. 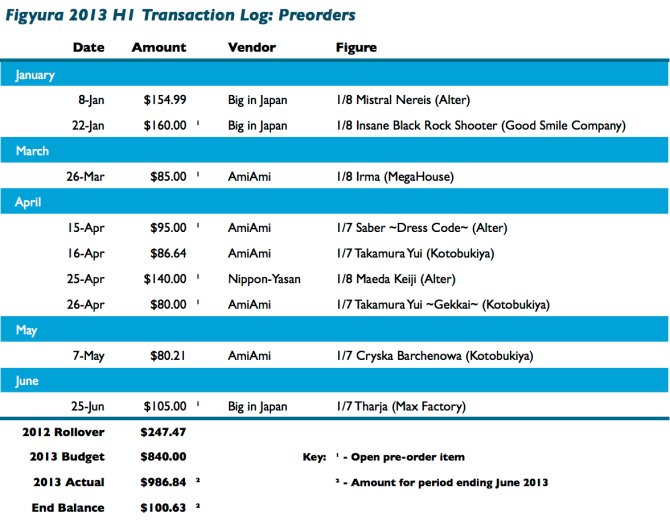 Which gives us the following progression over a six-month period. 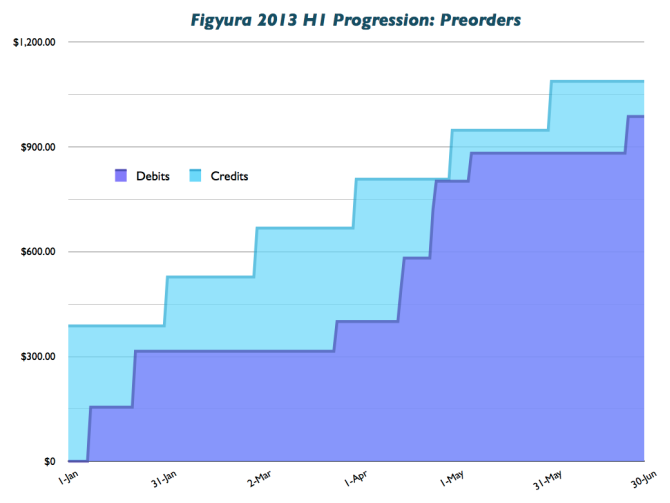 April was a very heavy month for spending compared to the rest, but February had no transactions, so the two more or less offset.

Here’s the transaction log and progression graph from the lump sum side. 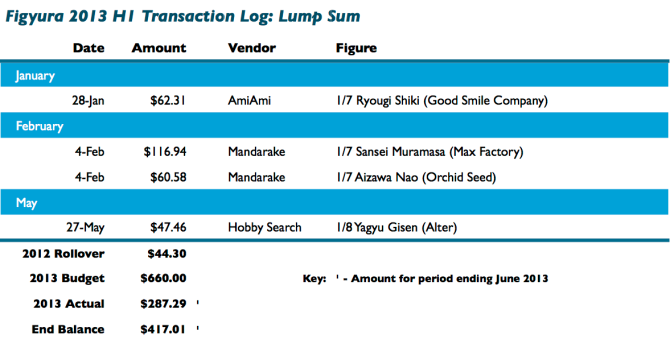 Well, this picture certainly looks better that last year, doesn’t it? I pretty much exhausted my lump sum budget in just the first four months of 2012, so spending less than half of my general purpose funds over the same period is a significant improvement that should help me keep options open later in the year.

As with last year’s mid-year report, I won’t get into the fully set of analysis I typically do for the year-end reports. I did spot one interesting trend with scale figure sizing in the first half, though, so let’s look at that breakdown now. 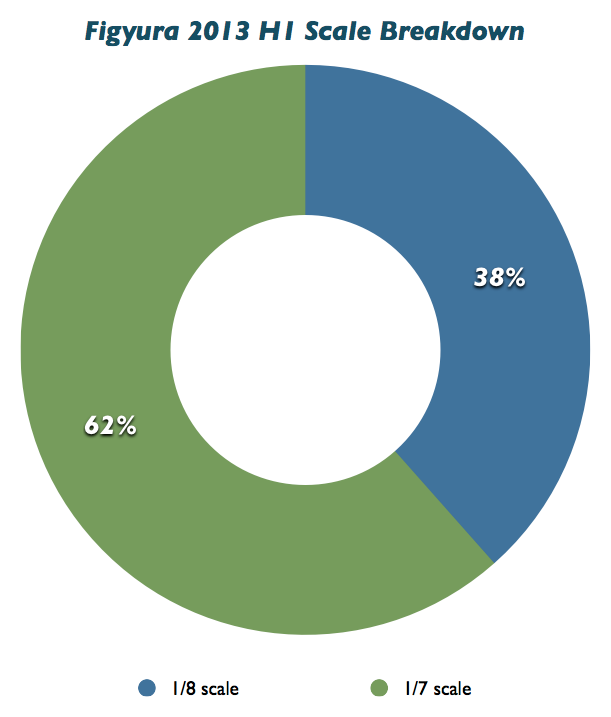 1/8 scale has been the standard in scale figure sizing for as long as I’ve been collecting, so I was pretty surprised to see that 1/8 scale figures were actually in the minority, outnumbered by 1/7 scales at a ratio of nearly 2-to-1. Granted, I prefer larger scales on the whole, so maybe this shouldn’t be a surprise, but there’s just usually not a lot of good 1/7+ scale figures to choose from. I wish this were an indication of an industry-wide shift, but I feel that it’s more likely due to an unusually good crop of larger scale figures in the first half of 2013. On the other hand, I’m a bit disappointed to see not a single 1/6 scale figure in this bunch, as that is probably my favorite size in terms of maximizing detail while still mostly fitting on my shelves.

That’s it! Check back at the end of the year for the full year-end report.