We’re at the end of the year which means that it’s time to do a full analysis of my purchases over the course of the year and compare the results against the budget plan that I original laid out.

The bishoujo figure industry is deeply rooted in Japan, which dictates that pricing for all products is set based on the Japanese yen (JPY). As such, it makes sense for foreign collectors to keep an eye on how well their native currency trades against the yen, as weakening of the native currency against the yen will translate to net price hikes above and beyond the normal rate of inflation.

2012 was a better year, overall, for the USD/JPY exchange rate than 2011, which isn’t saying much coming off a year which saw record lows. The average valuation for the currency index was ¥79.9 for the year, or a mere ¥0.1 increase over 2011, but the overall trajectory was upward rather than downward, which makes it a better year in my book. The currency index was relatively stagnant, hovering in the ¥78-¥80 range, for much of the year with a brief run up to ¥84 in mid-March and a longer, more impressive run starting in early October leading up to our current high around ¥86. Unfortunately, the positive momentum we’re seeing at the end of the year seems to be more due to apparent weakness in the Japanese economy than any tangible improvement in the financial situation here in the US.

I detailed a plan at the beginning of the year to split up the annual budget into two parts: a monthly rolling allocation specifically for preorders and a lump sum allocation for general-purpose use. I will look at how each portion was spent separately and then analyze trends for all purchases in aggregate. 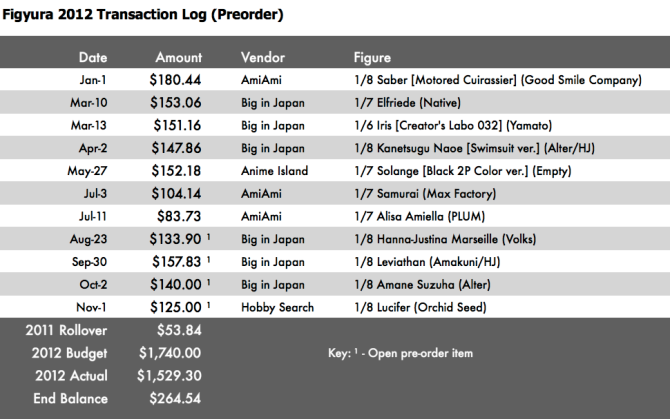 When I first started budgeting my figure purchases several years ago, I used a large, single lump sum allocation and I found that I tended to burn through the majority of my funds early in the year, which really hampered my ability to go after figures that came out later in the year. The introduction of a monthly rolling allocation was my solution to control the rate of spending over the course of the year.

The expected result is a linear stair-step trend line of credits with debits (purchases) tracking closely behind, which is what we see here.

The purpose of the lump sum allocation is to handle purchases that are difficult to plan in advance, like secondary market purchases and extra preorders during periods of high demand. 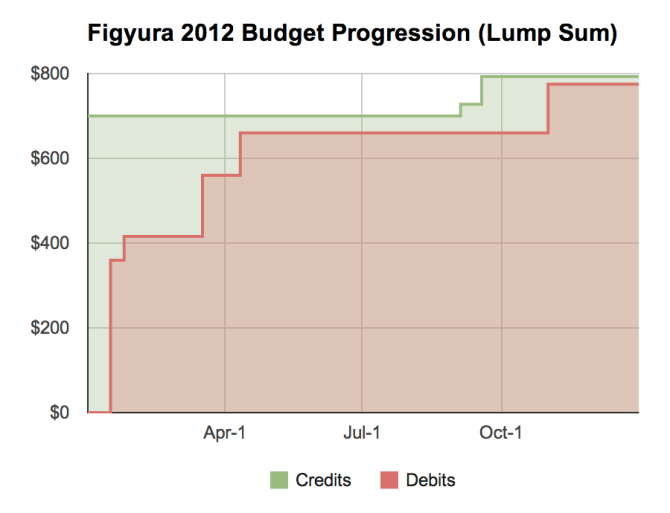 This year, I used the majority of the lump sum funds in the first half of the year on a mix of previously-released (Ryofu, Saber, Nida) and preorder (Miku, Narika) figures. The sale of a couple figures from my collection late in the second half helped me squeeze in one more preorder (IA) using the lump sum funds at a time when my rolling allocation was too depleted.

Taking both budget allocations into account, 2012 saw 17 new figures purchased and two figures sold for a net gain of 15, up from 12 in 2011. There were eight normal preorders, six exclusive releases, three previously-released figure purchases, and five open preorders at the end of the year.

The six exclusives were a significant increase from 2011, which saw only one such purchase. I thought I was being generous in budgeting for three exclusives at the beginning of the year, so this is a surprising result, though perhaps it shouldn’t be. In the past, I was less aware of exclusive releases as they didn’t show up at normal web shops like AmiAmi and Hobby Search, but now I use more and different sources for keeping up with new and upcoming figures. I’m seeing more exclusives in the pipeline than I did previously, so it stands to reason that there will be more that catch my eye.

Now, let’s examine spending behavior from a few different angles and see if there are any interesting trends therein. 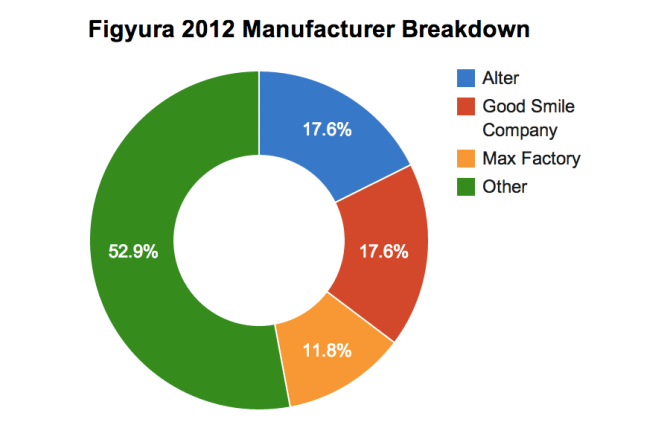 Alter, Good Smile Company, and Max Factory collectively accounted for slightly less than half of all purchases, which isn’t surprising since I would consider these to be my big three in terms of scale figure makers. “Other” is an aggregate grouping comprised of nine manufacturers, with one figure for each. Five of these (Amakuni, Aquamarine, Empty, Native, and PLUM) are makers from whom I had never previously purchased a figure. 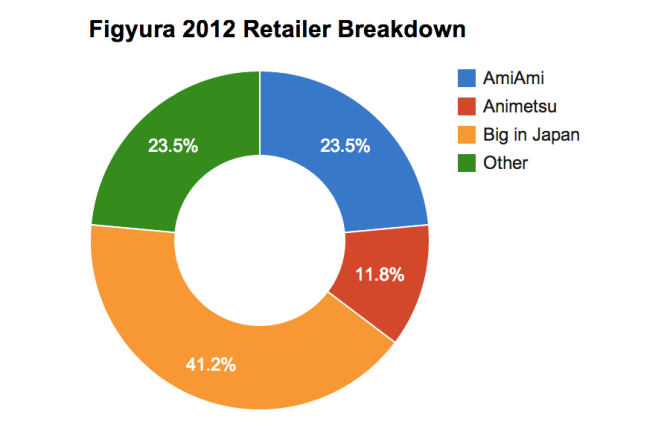 2012 was also a more diverse year for retailers, with seven uniques (up from five in 2011). What’s more interesting to me is the shift away from AmiAmi as the dominant retailer (69% in 2011).

I still like AmiAmi a lot as a retailer, but I have found myself turning to Big in Japan quite often of late. The reason is two-fold: (1) Big in Japan is usually price-competitive with AmiAmi, and (2) they handle exclusives where AmiAmi does not. Four of my seven purchases with Big in Japan were exclusives, so the fact that they provide an easy way to purchase such figures is a big part of the reason they’re seeing an uptick in business from me.

My average purchase price, including shipping and applicable fees, of all figures purchased was $135 (up from $108 in 2011). Normal preorders averaged $124, previously-released figures averaged $138, and exclusives averaged $148. All three categories came in above 2011 levels, suggesting a broader price shift in the market that I think many collectors have been feeling of late.

1/8 scale is by far the most common in the bishoujo figure industry, so it’s not surprising to see it come out on top here. Larger sizes are progressively less popular, so the distribution seen here is fairly representative of the industry at large or at least more so than the 2011 budget trend, which was skewed toward the larger scales by my personal spending behavior.

Honestly, I’m a bit disappointed with these results as I tend to favor larger scales up to a point–that point being 1/6 scale–but there’s simply too many good figures being produced at 1/8 scale to ignore.

I haven’t picked yearly favorites since 2009, but I wanted to take a moment to highlight the purchases that I felt were most satisfying for this year. 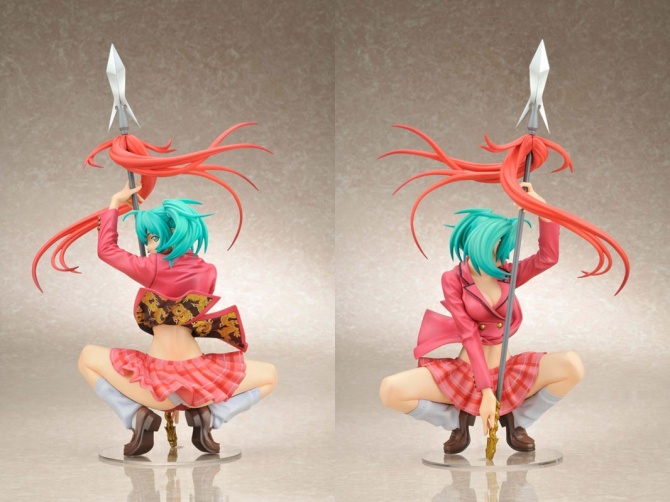 Despite being my most expensive figure of the year and knowing I could have paid less had I simply preordered this figure a couple years ago, I feel that UART’s Ryofu was my most satisfying purchase of 2012. She immediately became both my favorite Ikki Tousen figure and the best non-PVC figure in my collection. UART is an obscure, rarely trodden brand in the bishoujo figure community, but they delivered nearly flawless craftsmanship and a dynamite pose that elegantly captures the essence of the franchise in figure form. 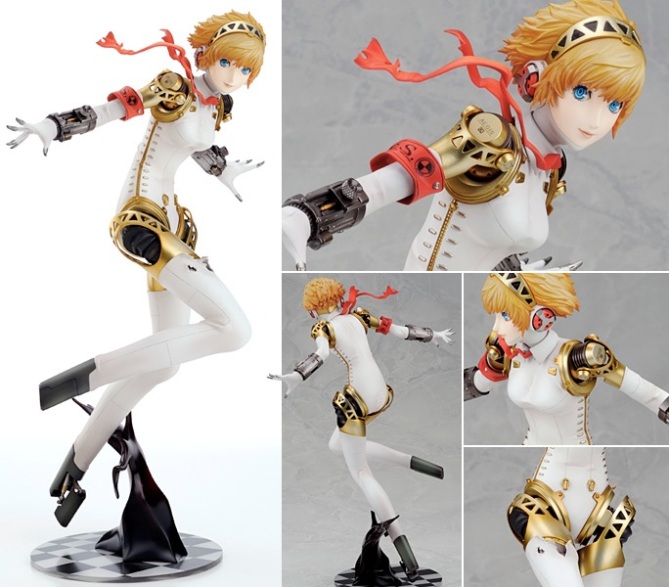 Alter puts out great figures on a consistent basis, but their 1/6 scale rendition of Persona 3’s cute android girl Aegis is exceptional, even by Alter standards. The pose, craftsmanship, and overall scope of the project approach masterpiece status. I wasn’t initially enthused with the slight changes Alter made to Aegis’s facial features between the painted prototype and the final PVC, but those reservations faded quickly once I had the figure in hand.

I was almost expecting to be disappointed with Iris, as my one previous experience with Yamato products was pretty bad, but this figure manages to meet and even exceed expectations. The production quality is excellent and Shirow’s unique style comes across to a surprising degree. 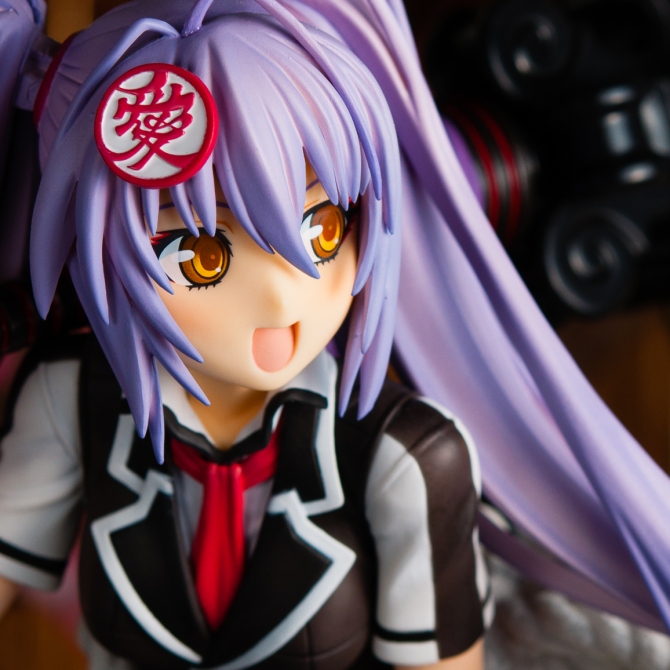 Despite being hampered by a lousy support arm design, Alter’s Naoe is probably my favorite in a line of very successful Hyakka Ryouran figures. Naoe looks fetching from all angles and the quality is excellent, excepting the aforementioned hammer support device.

I haven’t had Samurai in hand for very long, but this highly stylized schoolgirl-meets-samurai character was one of my most anticipated figures of the year and my initial impression is that Max Factory delivered the goods in terms of quality.

All in all, I’ve been pretty happy with the current budget strategy and I expect to make minimal changes headed into the new year, which I will outline in a follow-up post in early January. I’ll enter 2013 with five open preorders to look forward to and a decent bank of rollover funds to pursue one of the many promising preorders that have opened in recent weeks.

To my fellow collectors, did you have a budget strategy for this year? If so, how did it pan out? Are there any changes you would make going into the new year?