Kaname Madoka, heroine and main character of Mahou Shoujo Madoka Magica (aka Puella Magi Madoka Magica in the US), arrives as the first in a rapidly expanding line of Madoka figures from Good Smile Company. The series is notable for winning a number of awards in Japan, breaking Blu-ray disc sales records, and generally receiving a lot of positive buzz from the community. It is no big surprise, then, that GSC has moved quite aggressively with the Madoka franchise, pushing out a complementary set of the four core heroines in the first half the year and unveiling a second Madoka design–colloquially known as “Goddess Madoka”–as an unpainted prototype, presumed to be released later this year. 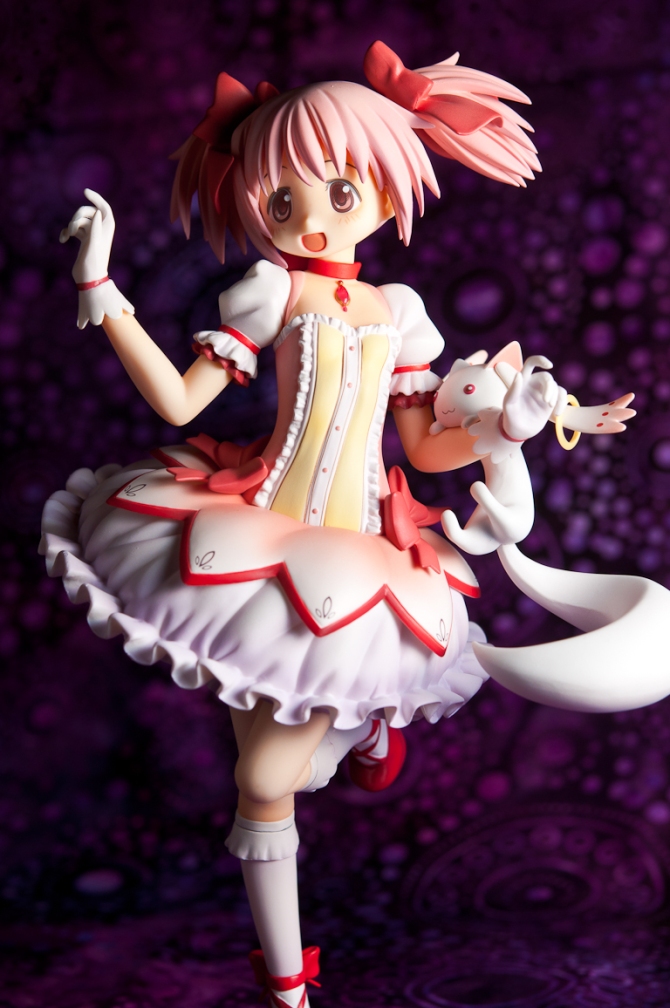 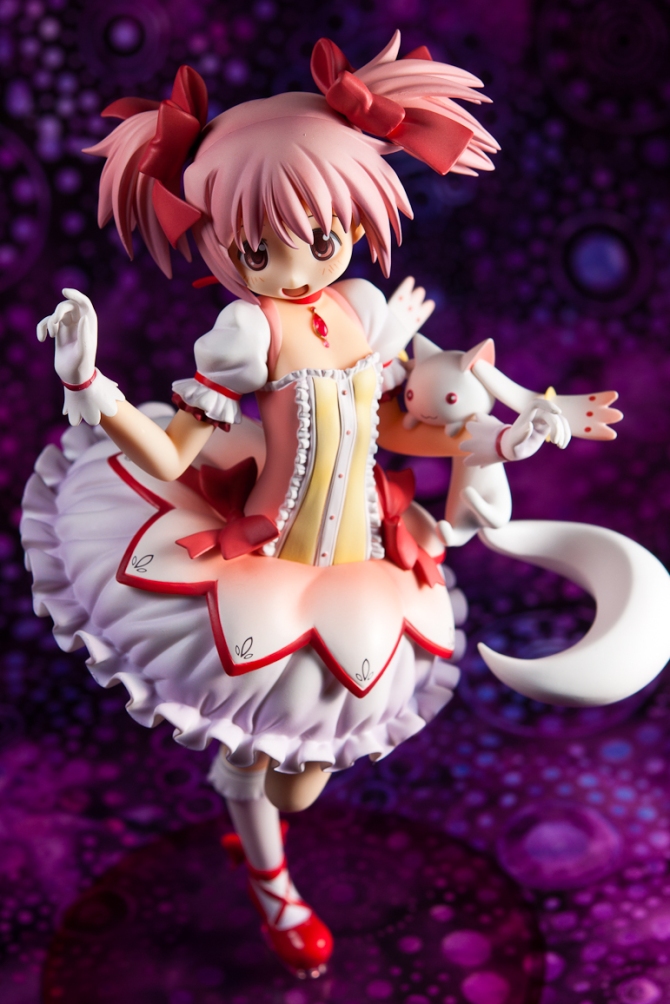 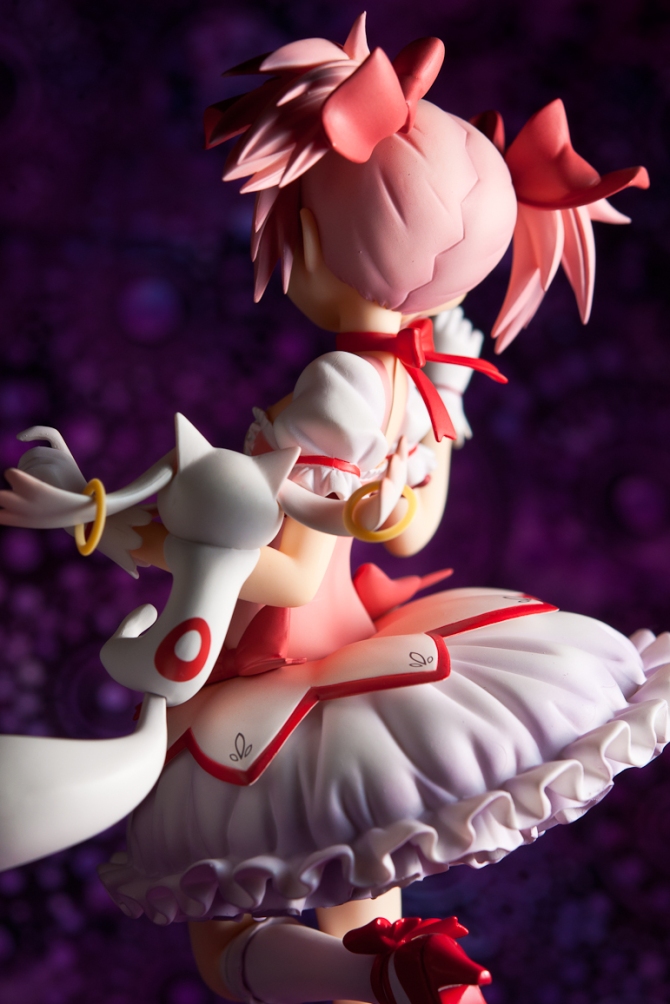 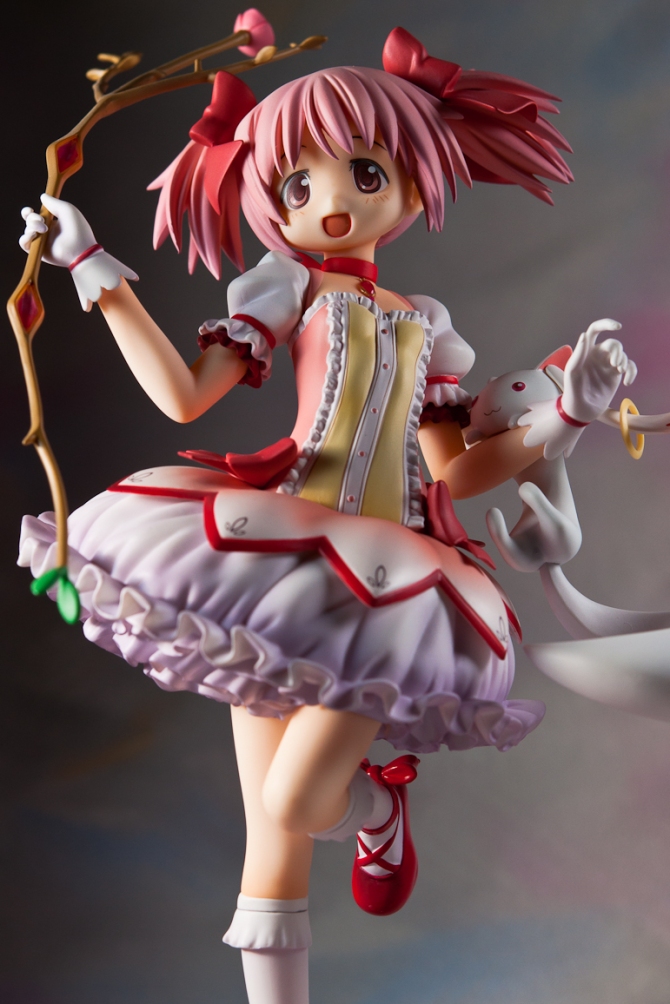 Madoka is seen wearing her signature magical girl guise, which is stereotypically frilly and frou-frou–and apparently one of Madoka’s own design rather than some cosmic happenstance. On one arm she carries her familiar, Kyubey, in tow while her other hand carries her unstrung (magically strung?) bow. Both hand-arm loadouts are interchangeable with empty variants, allowing Madoka to be displayed in four unique configurations.

GSC’s sculpt imparts Madoka with an impression of vivacity and good cheer, with a hint of timidity, which is in line my impression of her character from what I’ve seen of the series. The design obviously plays up Madoka as a cheerful, cutesy heroine, which is a pretty traditional representation for the magical girl genre, though I find it a curious juxtaposition to the weighty, darker themes that become apparent early on in the show.

Quality-wise, Madoka features the same solid craftsmanship I’ve come to expect from Good Smile Company in recent years. Paint and sculpt work is smooth and tidy. The interchangeable bits fit snugly, without obvious gaps. Though I was unable to identify any major defects with my particular Madoka, I would still rate her a step below something like Saber Lily in terms of total craftsmanship simply because Madoka doesn’t feature any particularly notable design elements that have a big wow-factor.

GSC supplies Madoka with a translucent pink display base lacking any other ornamentation. The design is notably less ambitious than my last several GSC figures (Black Rock Shooter, two Sabers, Rin, and Canaan), which have all featured textured terrain bases. I’m not particularly surprised given the subject matter, but it would have been neat if all four of the recent GSC Madoka girls had interlocking display bases since they’re obviously intended to go together.

Honestly, I’ve struggled to nail down exactly how I feel about this particular figure. I feel that Madoka is technically sound, as a figure, but I question my motivations for ordering her in the first place. Normally, I make purchase decisions on aesthetics alone, frequently opting to buy figures featuring characters I know little to nothing about and passing on figures of characters I love because I found them lacking a certain level of subjective aesthetic merit. With Madoka, I feel like I let myself fall under the influence of the hype surrounding the anime and made a purchasing design based on association to a popular series rather than judging the figure strictly on its own merit. As such I’m inclined to say that it wasn’t the best decision, despite the fact that I think Madoka is a decent enough figure.

As usual, I’m not the first to review this figure. Check out these other reviews for an alternate take: