Next up on the review pile is Alter’s Ookami Ryouko from Ookami-san to Shichinin no Nakamatachi. While I picked her up relatively early in the year, technical difficulties and aborted photo shoots delayed her review by months. Continue on after the jump to see how this “wolf in wolf’s clothing” stacks up. 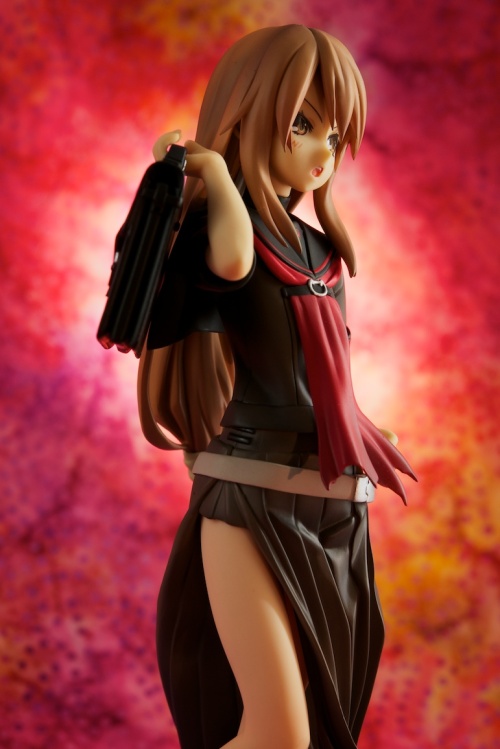 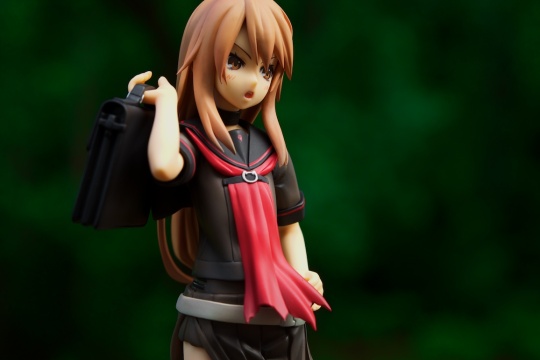 I must confess that I know little of Ryouko other than that she is apparently a bit of a tsundere and that she is supposed to be modeled after the wolf from Little Red Riding Hood. I wanted to catch a couple episodes of the series to get a little more insight into her character, but unfortunately Ookami-san has been licensed by Funimation since 2010 yet remains unreleased. Curse you, Funi! 😡

Visually, Ryouko reminds me a bit of both Taiga from Toradora! and Shana from Shakugan no Shana, which puts her in good company. Her outfit resembles standard seifuku up top, but the side slit skirt and military-style calf-high boots on the bottom are assuredly not standard school issue and serve to give Ryouko a bit of a roguish appearance. Add to this a dramatic red-on-black color coordination that complements Ryouko’s light brown hair nicely and further serves up impressions of a strong and rebellious spirit. Ryouko carries a pair of what I’m assuming to be animate totems on her belt: one black and one white.

Her stance and expression suggest a state of waiting and annoyance on Ryouko’s part, as might be appropriate just prior to departure to/from school. It’s a fairly static pose, which could be viewed as boring, but keen observers can detect subtle highlights in Alter’s work here. As a skillful example of the Art of the Tease, Ryouko’s skirt is conveniently pushed slightly to one side, inviting furtive glances at her long, slender legs while denying insight into her more intimate accompaniments.

Hair continues to be an area where Alter excels and I think it is the area most worthy of praise when assessing the paint and sculpt detail on Ryouko. Her long hair flows backward into a sort of faux ponytail while her face is framed by thick, side-swept bangs and extended side locks. It’s a fairly compact hair style for its length, which affords less room for detail as compared to a looser style that flares out–à la Buddy–but Alter manages to do a pretty good job of packing a lot of sculpt detail into Ryouko’s mane as it flows down her back. Subtle gradations in shading when moving from the center to the tips of each tress further enhance the detail to be found here. Ryouko’s outfit, on the other hand, is fairly unremarkable, detail-wise, while her left hand has a bit of an uncanny, prosthetic look that makes it the weakest area of the sculpt, in my opinion.

One other oddity worth noting is that while the paint finish on this figure is almost uniformly matte, Alter elected to use a glossy finish for Ryouko’s eyes and the toes of her boots. As a result, I was dogged by glare coming off Ryouko’s eyes throughout the photo shoot. I suspect that this effect becomes less distracting under normal interior lighting conditions, but given that the glossy eye treatment is hardly standard practice and the fact that catch lights are already painted into the character’s eyes, I’m not sure what Alter was trying to accomplish here.

Finally, we come to the display base–an area where Alter has been largely maintaining the status quo for a while now. Unfortunately, Alter continues to play it safe and boring with Ryouko. The display base is a simple clear plastic design shaped into a generic animal-eared profile–an obvious nod to Ryouko’s role as the wolf–with a handful of frosted accents. There isn’t even a series logo or character name inscribed on the base.

When I look back at my purchases over the course of this year, I must confess that I often think Ryouko would be the first to go if I had to do it all over again. While I can find only minor faults in the execution, this figure lacks a certain sense of epic grandeur and exoticism captured by favorites such as GSC’s Saber Lily ~Distant Avalon~ and Alter’s own Momohime. Alter does reasonably well with what they’ve got, but it’s hard not to view their take on Ryouko as just another sailor-suited heroine going about her daily business.

As usual, I’m not the first to review this figure, especially this far after release. Check out these other reviews for an alternate take: