Alter has entered the Guilty Gear arena with Dizzy as their combatant. They did deliver us figure “Heaven or Hell?” Dizzy review “FIGHT!” up next. 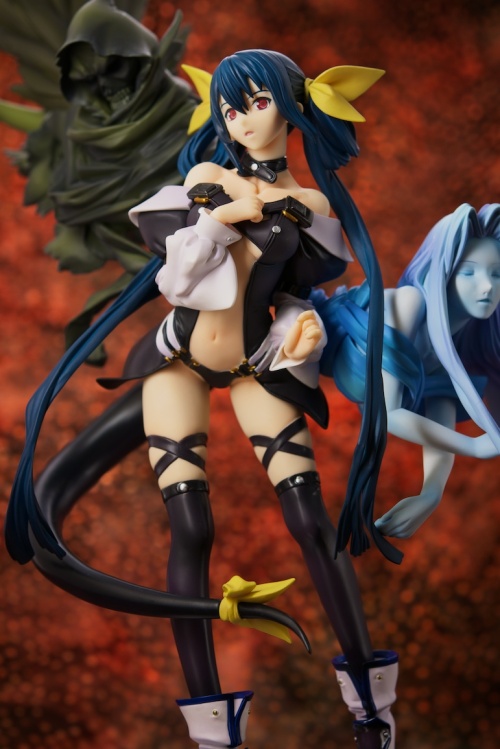 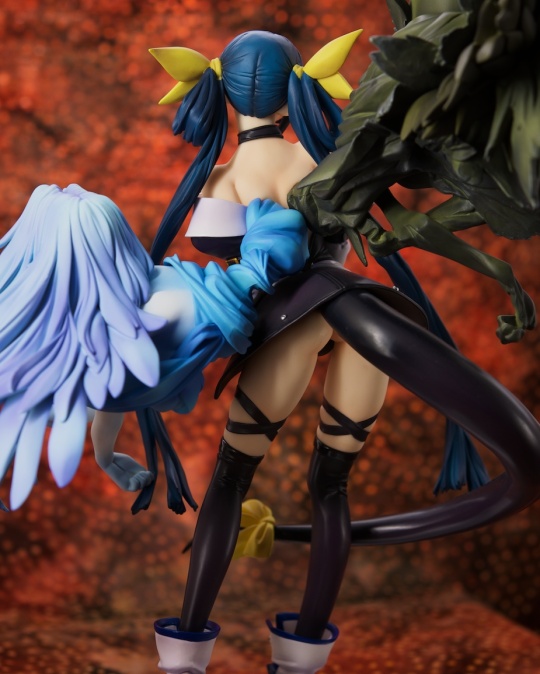 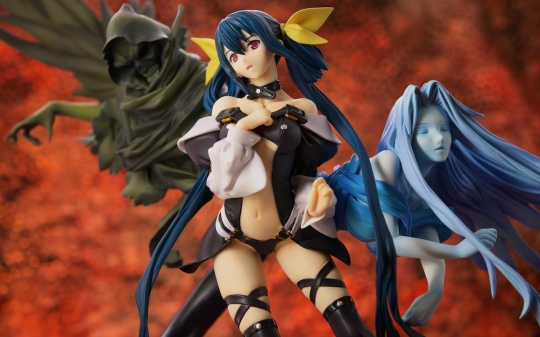 Alter’s first entry into the rather underdeveloped Guilty Gear figure market features the half-human/half-Gear/all-lovely heroine Dizzy. She is but one of a veritable carnival of bizarre and eccentric characters from the cult 2D fighting game series. Notable oddballs include the infamous trap, a prehensile hair user, the possessed dude, and another guy who hides behind a paper bag, just to name a few. Dizzy herself is purported to be only 3 years old, all appearances to the contrary, which is assumed to be related to her Gear heritage. Her two animate wings are called Necro and Undine. I’ll leave it as an exercise to the reader to figure out which one is which (hint: you don’t have to be a language scholar).

In doing the write-up for this review, I was quite surprised to discover that Alter’s Dizzy is only the second pre-painted PVC figure featuring her character to hit the market–the other being Kotobukiya’s version, which was a Hobby Japan exclusive released in a couple different colors and technically credited to Dizzy’s cameo in the Queen’s Gate franchise rather than the Guilty Gear series. Take a look at any anime-themed image board and you’ll quickly come to the conclusion that Dizzy is far and away the most popular character to come out of the Guilty Gear series. Further to that, the source material isn’t exactly new, with the most recent major entry in the series being Guilty Gear XX Λ Core, released in 2006. So why hasn’t Dizzy received more figure love up to now?

I’m sure the apparent lack of Dizzy figures is in no small part attributable to the niche status of Guilty Gear within the fighting game genre, which is itself a relatively niche genre within the greater whole of video gaming. There was also some confusion in recent years surrounding the ownership of the franchise, as developer Arc System Works somehow lost control of Guilty Gear to SEGA when the latter merged with Sammy. I imagine this could well have hampered any efforts to get new merchandising deals for the series in place. Fortunately, Arc revealed earlier this year that they have re-acquired the rights to Guilty Gear and will presumably be working on new games.

All ruminations concerning the origins of Alter’s Dizzy aside, she’s here now and it’s time to evaluate how well she stacks up as a figure.

Pose-wise, I think Alter does a pretty good job here. While Dizzy’s fighting game origins strike me as a good opportunity to showcase a battle pose or special move, Alter opted for a relatively static pose that captures Dizzy looking innocent and perhaps a little unsure of herself. Dizzy is frequently portrayed as innocent and/or naive, probably owing to her age, so I think the expression we see here is appropriate for her character. We also get a good look at Necro and Undine, who presumably have a vested interest in watching over their young host.

The sculpt and paint work are uniformly excellent on this figure. Necro and Undine are the obvious highlights here, with both receiving some wonderfully sculpted features and fine paint work that do an excellent job of drawing attention to the fact that these aren’t your grandmother’s angel wings.

Dizzy, herself, is slightly more mundane by comparison, but not disappointing by any stretch. Her exposed shoulders, neck, and clavicle area are unusually detailed and her curves are pleasingly curvy where visible. Her hair is similarly well-detailed, although the fact that it’s tied up tends to make it less impressive than, say, Buddy‘s hair was. Dizzy’s body and outfit paint work is largely matte with more uniform gradation than her wings, although there are a few glossy highlights here and there.

Dizzy’s display base is the unassuming, flat plastic with painted logo variety. It does feature a two-tone, 50/50 vertical stripe that provides a subtle reference to Dizzy’s half-Gear heritage, so I’ll give Alter credit for that. Even so, we’ve seen what 3D textured terrain bases can do for a figure, so I would continue to encourage all manufacturers to push the envelope a little more in this area.

All in all, I think Alter manages to deliver one of the finest figures I’ve purchased in a long time from a franchise that sorely needs more quality figures. So where can they go from here? Alter recently announced that Dizzy will be receiving a Dec. 2011 re-release, which would indicate that demand for this particular figure was strong. That gives me some encouragement that there may be hope for other Guilty Gear figures in the near future. Personally, I’m hoping to see Baiken. 🙂

As usual, I’m not the first to review this figure. Check out these other reviews for an alternate take:

When I  play GG, I typically main with Baiken, with Dizzy as a backup. I like that Dizzy can spam lots of projectiles while maintaining a melee assault with relative safety. It’s a simple strategy that makes life difficult for noobs, but won’t do much to hinder experienced players. That’s pretty much the level I’m at with these games.

I find myself frequently drawn to fighting games despite the fact that I largely suck at them. I haven’t really been able to get past the execution hurdle on anything after Street Fighter II and I’m not really willing to invest the kind of time required to get better at these games.

One thought on “Review: Alter 1/8 Dizzy”